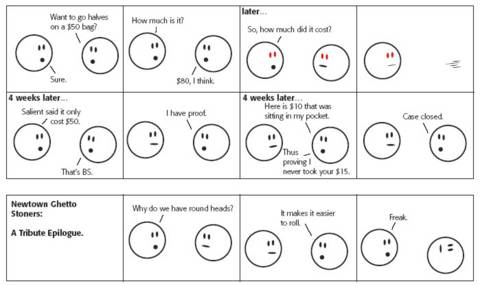 Once again, you know you're famous when you get parodied... This cartoon appeared in Victoria University's fine (not to mention award winning) student's association magazine Salient earlier this year, and relates to some dodgy dealings to do with J Day.

"Potted" summary: NORML were given a VUWSA grant of around $1500 for the J Day event, after presenting a budget of around $3000; questions were raised about whether that budget was accurate; NORML ended up giving about $500 back; an SGM was held to try and remove the VUWSA Exec member involved in the debacle; he managed to hang on to his position. All uncovered by and reported by the aforementioned student media organ.

UPDATE: I missed out the explanation for the bottom strip, and screwed up the hyperlink to Salient. Both are fixed now (thanks, Sarah!).
posted by Jarrod at 8:28 pm

This is the online home of Newtown Ghetto Anger and Cone of Science.